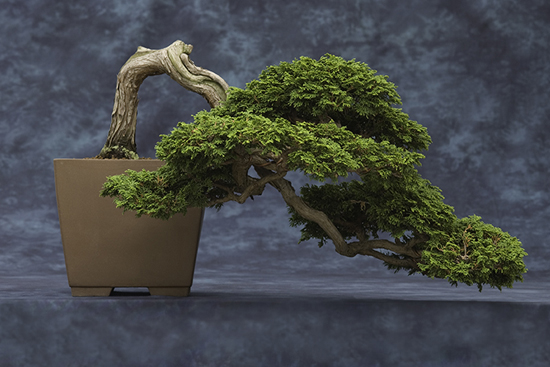 It seems only fitting that the Bonsai collection at the Arnold Arboretum is a small one. But the famed collection’s 35 Japanese dwarf trees—some nearly three centuries old—are a giant treat for the senses when they emerge each year from winter storage to be prominently displayed in a serene garden setting.

Formally known as the Larz Anderson Bonsai Collection, the specimens were brought to the United States by Boston businessman Anderson in 1913 after a short stint as US ambassador to Japan. Among the meticulously sculpted trees are seven hinoki cypress between 150 and 275 years old. Anderson’s widow, Isabel, donated the majority of her late husband’s bonsai collection (30 plants) to the Arnold Arboretum in 1937, along with funds to build the shade house used to display them. The rest of the Anderson bonsai came to the arboretum following her death in 1949.

In Japan, Bonsai cultivation dates back 1,000 years. Using such techniques as pruning, root reduction, defoliation, and grafting, bonsai growers create enchanting miniature trees identical in shape and style to full-size trees. According to the arboretum website, the bonsai are stored in a concrete-block structure that is evenly maintained at 33 to 36 degrees Fahrenheit during winter months. The trees must be fully dormant before they go into storage in November and are checked for water once a week until they emerge in April.

Established in 1872, the Arnold Arboretum of Harvard University is a National Historic Landmark, spread over 281 picturesque, hilly acres. It was designed by famed 19th-century landscape architect Frederick Law Olmsted as part of the string of parks and ponds known as the Emerald Necklace.

The Arnold Arboretum is at 125 Arborway, Jamaica Plain; find directions here. The Larz Anderson Bonsai Collection is approximately a 10-minute walk from either the Arborway Gate or the Forest Hills Gate and about a 20-minute walk from the Bussey Street Gate. The collection is on view daily from 8 a.m. to 3:45 p.m. from mid April through mid November, excluding holidays. A wheelchair-accessible, crushed stone path from the Leventritt Shrub and Vine Garden leads to a paved path surrounding the structure that houses the collection. For more information, call 617-524-1718.

Arnold Arboretum’s Jewel of a Bonsai Collection
0
share this