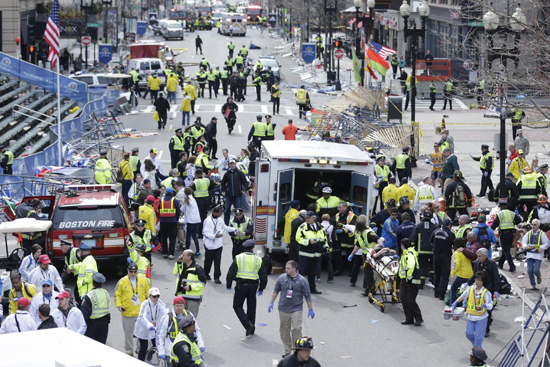 The University is offering counseling services for students, faculty, and staff fearful or anxious after the Marathon Monday bombings crippled Boston. Photo courtesy of KRON 4 News

Within hours of last week’s Boston Marathon bombings, which killed 3 and injured 282, mental health professionals, chaplains, and trauma specialists throughout the city had put in place a support system for those experiencing emotional trauma. A drop-in center was quickly staffed, and the Mayor’s Health Line provided free trauma counseling all last week. At BU, counseling was available to students, faculty, and staff.

Feelings of grief and anxiety are normal, says Terence M. Keane, a School of Medicine professor of psychiatry. “But there is a lot of support out there for Bostonians to move in the right direction, get back to work, and get back to their lives.” Keane is also director of the Behavioral Science Division at the National Center for Post-Traumatic Stress Disorder. “That’s the direction that we are hoping everyone will take,” he says.

And by and large the city has returned to a semblance of normalcy in the last few days. Most of Copley Square was reopened to the public Wednesday, the first time since the explosions. But the emotional fallout continues to haunt some, a reminder that trauma impacts everyone differently. For a small group, moving forward may require professional help.

Keane, an expert in the diagnosis and treatment of post-traumatic stress disorder (PTSD), is the author of more than 200 articles on PTSD. His contributions to the field have earned numerous accolades, including the International Society for Traumatic Stress Studies Lifetime Achievement Award, the Robert Laufer Award for Outstanding Scientific Achievement, and the American Psychological Association (APA) Outstanding Research Contributions Award. He is a fellow of the APA and the Association for Psychological Science, and has consulted, lectured, and led international workshops on topics related to psychological trauma. Currently, he is working on developing a nationally representative registry of PTSD patients and the construction of an internet-based treatment program for returning war veterans with risky alcohol use and war trauma symptoms.

BU Today recently spoke with Keane about how people process trauma, how to treat PTSD, and when a person should seek professional help.

Information about the University’s counseling services can be found at the bottom of this article.

BU Today: Is there a typical way that most people react to trauma?

Keane: I think everybody has a reaction when traumatic events occur, and if students are feeling the effects of Marathon Monday, it’s a very appropriate response. It’s universal and common for people to feel destabilized, stressed, and anxious in the immediate term. The thing is, what do you do about it? That’s really what the question is. I think we’re all destabilized by a terrorist attack in our city, especially one with civilian targets.

The vast majority of people recover quite well in a matter of weeks and months, even from direct exposures. Even if somebody was down at the finish line and even if they’re very shaken by the experiences, they are likely to recover in a relatively short period of time. The trajectory for most people is recovery and return to normalcy.

What should students do if they are still feeling stressed or anxious?

First and foremost, reach out to others—trusted, close friends and family members. Share your experiences with them. The second thing to do is to reciprocate by offering support to other people who have been exposed to the terrorist attacks. Then the third thing to do is to return as quickly as possible to a normal schedule. That means going to bed at the right time, getting up at the same time, attending classes, and fulfilling responsibilities. It’s important to go through these motions in an effort to get back to a schedule of normalcy. Be active, engage in exercise because it will improve sleep. Also eat properly. Last, be alert to changes in the environment, be alert to large crowds.

Can these feelings be labeled as PTSD?

Not yet. This is the normal reaction; there is nothing unusual about this right now.

Isn’t it true that some people may not experience feelings of fear and anxiety until later?

That’s right, these things might not emerge right away when everyone else is moving on.

Some students have reported feeling guilt because they were physically unharmed and others near them were maimed or killed. Can you address this?

For people who were directly affected—that means people who were wounded or were at the site of the explosion and were spared physical injuries—there is something called survivor guilt. It was first identified in the survivors of Hiroshima and Nagasaki. Quite ironically, rather than feeling good about surviving, survivor guilt is characterized by people feeling regret that they survived while other people died or were seriously injured. This occurs predominantly in people who develop PTSD, but it is a trait that we always look for when we speak with and work with people who have been exposed to traumatic experiences such as this.

When is the right time to seek professional help?

If somebody is still having significant problems after a few weeks’ time, then they should seek professional help. By problems, I mean if they are not getting out of bed, if they are not leaving their rooms or are hiding out and not fulfilling duties and responsibilities. We have a premier program right in Kenmore Square called the Center for Anxiety & Related Disorders, and that’s one place for people to seek assistance.

There is a tremendous amount of support in this city. This city is resilient. This was an attack on all of us even though clearly a small number of people bore the brunt. All of the communities that exist out there, whether they be universities, schools, churches, or synagogues, will be paying attention to their communities in the interest of helping people.

I also want to add that there are many veterans who are students and faculty members at BU, and they need to know that VA Boston is here to help them. VA Boston houses the National Center for PTSD, and eligible veterans should consider this resource if they feel this has caused a serious reaction in them. Many of these young people have been exposed to improvised explosive devices in Afghanistan and Iraq, and they need to be alert to the effects that this terrorist attack might have on them.

For students wanting to talk about their feelings, there are several resources available via telephone and in the residences. Students living in a residence hall can visit a residence hall office for counseling resources. Crisis counseling services can be reached at 617-353-7277 and Student Health Services and Behavioral Medicine at 617-353-3569. Students who wish to talk to the chaplain staff should call 617-353-3560. The Faculty & Staff Assistance Office, which can be reached at 617-353-5381, is available to provide confidential counseling to graduate students, faculty, staff, and their families.

Aftermath of Marathon Bombings: Anxiety, Fear Persist for Some

There are 6 comments on Aftermath of Marathon Bombings: Anxiety, Fear Persist for Some

Aftermath of Marathon Bombings: Anxiety, Fear Persist for Some
6
share this