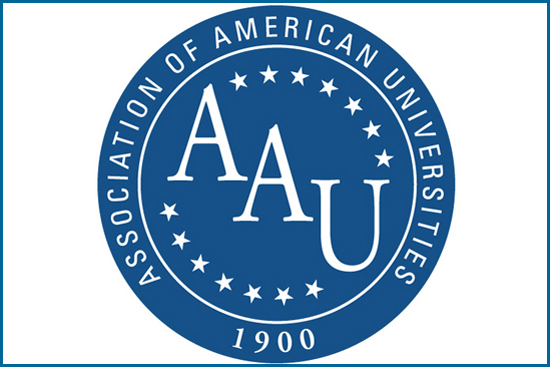 BU President Robert A. Brown was one of 187 university professors who signed an open letter, published in Politico, to President Obama and Congress calling for restored funding for research and education. Image courtesy of aau.edu

Reduced federal funding in research and higher education, stemming in part from the automatic budget cuts known as the sequester, has created an “innovation deficit,” which undermines the economy of the United States, according to two leading associations of universities. To publicize their concern, the Association of American Universities and the Association of Public and Land-Grant Universities have published an open letter in Wednesday’s print edition of Politico. The letter urges President Barack Obama and Congress to bring federal investment in education and research to the level necessary to fuel the United States’ economy and maintain its role as a global leader.

The Association of American Universities (AAU) is a prestigious group of leading research institutions that includes Boston University, and the letter was signed by President Robert A. Brown, along with 186 other university leaders.

“Boston University is committed to our mission as a major research university, through which our faculty and students work to advance our understanding of the world, bring about scientific and technological developments, and tackle the most pressing challenges facing society,” said Brown. “Decreases in federal support of research will harm the nation, not only by diminishing the stream of innovations that will fuel economic growth, but also by making more difficult our continued intellectual leadership and our ability to prepare the next generation of research leaders.”

AAU President Hunter Rawlings III said his association does not normally place such ads. “But,” he says, “we felt this was an occasion to go on record publicly and strongly to support the funding of research after the stagnation of the last few years. The situation is much worse with the sequester. Everyone worries about the federal deficit—we’re worried about the innovation deficit. We hope that more members of Congress start paying attention to the innovation deficit and respond to it as a call to do something.”

Barry Toiv, AAU vice president for public affairs, said the ad is targeted to Washington policymakers and the news media. Politico, which is published daily when Congress is in session and weekly during Congressional recess, has a circulation of 33,000 and is considered required reading by the Beltway political establishment.

Calling on Congress and the President to reject “unsound budget cuts and recommit to strong and sustained investments in research and education,” the AAU/APLU letter paints a grim picture of a future without that continued investment, one in which Americans are outpaced by nations like Singapore and China, which in the last two decades have invested two to four times as much in these areas as the United States. Rawlings cited the potential toll on the National Institutes of Health (NIH) of the sequestration, which requires NIH to cut 5 percent, or $1.55 billion, applied evenly across all NIH-funded programs.

“Throughout our history, this nation has kept the promise of a better tomorrow to each generation,” the letter states. “This has been possible because of our economic prosperity based in large part on America’s role as a global innovation leader. Failing to deal with the innovation deficit will pass to future generations the burdens of lost leadership in innovation, economic decline, and limited job opportunities.”

Rawlings believes that most people don’t appreciate the economic consequences of a downturn in research funding. The AAU/APLU letter is the latest salvo in the research establishment’s increasingly vigorous protest against looming budget cuts. In April, more than 50 Nobel laureates signed an open letter from the American Federation of Scientists urging Congress to exclude science research from the sequester’s hatchet.

Economists estimate that more than half of US economic growth since World War II is the result of technological innovation, mostly the fruit of federally funded research at US universities. In the AAU/APLU open letter, university leaders noted that federally funded research has led to lifesaving vaccines, lasers, magnetic resonance imaging (MRI), computer touchscreens, GPS, the Internet, and a litany of other advances “that have improved lives and generated entire new sectors of our economy.”

AAU, which BU joined in the fall of 2012, is an association of 62 leading public and private research universities in the United States and Canada. Membership is by invitation, based on excellence in research and scholarship as well as undergraduate, graduate, and professional education in a number of fields. APLU, the nation’s oldest higher education association with roots going back nearly150 years to the start of the industrial revolution, is a diverse research and advocacy organization comprising public research universities, land-grant institutions, and state university systems in all 50 states. Its 218 member universities conduct nearly two-thirds of all federally funded academic research.

There are 2 comments on AAU Open Letter to Congress: Restore Research Funding