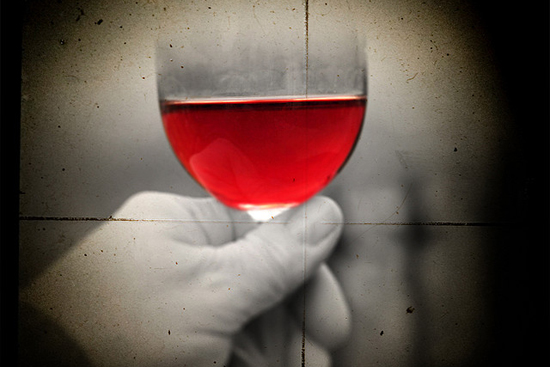 A glass and a half a day or less of alcohol may raise your cancer risk, a BU researcher says. Photo by flickr contributor jyryk

How many of us enjoy a glass or two of wine at dinner? How many of us have read that moderate drinking of red wine is good for the heart?

How many of us know that even moderate drinking might increase our cancer risk?

That eye-catching news turned a few media heads after a recent study was published in the American Journal of Public Health. The authors, including Timothy Naimi, a School of Medicine and School of Public Health associate professor, attribute 6,000 American deaths annually to cancer from moderate drinking, which they define as a drink and a half per day or less. Add in alcohol consumption at all levels and the total surges to 20,000 cancer deaths a year, according to the study. (For perspective, that 20,000 figure represents 3.5 percent of all cancer deaths in the country.)

For men, lethal alcohol-caused cancer typically afflicts the mouth, throat, and esophagus, the researchers say. In women, breast cancer is the most common cancer killer linked to alcohol consumption.

The researchers synthesized risk estimates from hundreds of other studies to come up with their findings. Naimi believes the big takeaway is the total number of deaths, the role of excessive drinking, and the fact that these deaths are preventable. But as everyone knows that drinking to excess is bad for a host of reasons, he understands the headlines generated by the findings on moderate drinking.

Evidence of excessive drinking’s role in cancer is much greater than that for the role of modest drinking, says Naimi, an alcohol epidemiologist specializing in binge and youth drinking and alcohol policy. The idea that limited drinking causes cancer “should be interpreted with caution.…I have nothing against alcohol. My background is as a physician, and my interest is in seeing harm from alcohol minimized.”

But some doctors say the moderate drinking findings need to be taken seriously, and Naimi says there is evidence from the literature he and his team reviewed supporting their concerns. And, he adds, deaths from alcohol “dwarf any small number of people who may derive benefit from low-dose alcohol.” Indeed, among all people who start drinking, 5 to 10 times as many die from it as are benefited by it, according to Naimi, who notes that you can’t predict when people begin drinking whether they’ll wind up an alcoholic: “You don’t know prospectively who’s going to end up as a moderate drinker.”

Nor is he convinced by studies showing heart benefits from moderate drinking. For one thing, he says, those studies have never included the accepted standard in scientific research: a randomized, controlled study comparing moderate drinkers with teetotalers. Also, moderate drinkers tend to come from higher on the socioeconomic ladder, a rung at which people tend to be healthier. In other words, moderate drinking may be “a reflection of people’s social position and good health. It’s not its genesis,” Naimi says.

Studies linking alcohol to cancer are based on calculations using three types of data, he says: the numbers of people who drink at different levels, the prevalence of various cancers at those various drinking levels, and the number of cancer deaths among people at each level. The American Cancer Society lays out the cancers for which the evidence of an alcohol link is strongest, while adding that the precise mechanism for how drinking leads to the disease is not certain.

As for the argument that there’s a certain risk with much of the food we consume—nonorganic fruits and vegetables marinated in pesticides, for example, or brown rice, once thought to be healthy, but now found to contain risky levels of arsenic–Naimi replies, “Alcohol is not a food. Alcohol is a drug,” and one with so-called empty calories that lack nutritional value.

There are 17 comments on A Drink a Day Raises Cancer Risk, Study Says