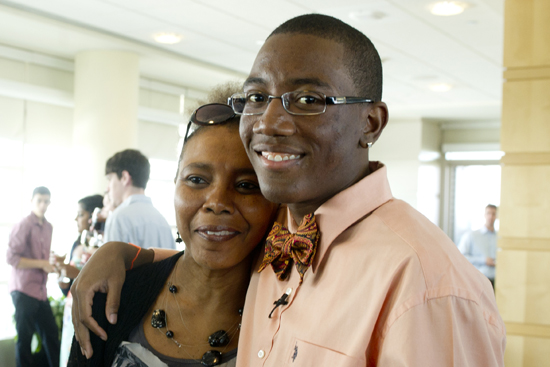 Kyle Trotman (CAS’11), with his mother at Commencement last May, died unexpectedly in December. Friends remember him as warm, self-assured, and vibrant. Photos by Vernon Doucette

Most people remember the first time they met Kyle Trotman. For Dean of Students Kenneth Elmore, it was during Trotman’s freshman year, when he was a member of BU’s Marching Band drumline. “He was a skinny guy, putting some sass on a big drum,” says Elmore (SED’87).

Sarah Jill Bashein ran into Trotman at a group interview, when both were applying for jobs as student advisors for the College of Arts & Sciences orientation program. “He was eloquent, calm, professional, and totally self-assured,” says Bashein (CAS’11).

Sekani Allen remembers meeting Trotman on his first day of classes. Trotman introduced himself to the freshman at the Howard Thurman Center. “The thing that struck me the most,” recalls Allen (CAS’13), “was how warm and friendly he was. Kyle had such a vibrant personality.”

Across campus and across the country, friends are mourning the loss of Trotman (CAS’11), who died unexpectedly of natural causes on December 27 in Brooklyn, N.Y., where he grew up and where he returned after graduating from BU last May. An economics major, he was an analyst at JPMorgan Chase at the time of his death. He was 22 years old.

Many knew Trotman as a student leader at the Howard Thurman Center, BU’s multicultural center, where he developed the Brothers United program, which seeks to unite black male students. He also coordinated the center’s Cultural Mentorship program, which helps ease the transition to college for freshmen. Others knew him as a member of the Marching Band and as a mime performer with the Inner Strength Gospel Choir.

But staff, classmates, and friends will remember Trotman best as an extraordinary friend who had an unerring ability to know when someone needed a smile or a word of encouragement.

“His immense character was displayed in his ability to put others before himself,” says Katherine Kennedy, director of the Thurman Center. “His commitment every day to be a blessing in other people’s lives encouraged them to be a better person.”

That was true for Allen, who says Trotman inspired him to become “a better man” and a better friend, and encouraged him to “always meet new people with a smile on my face.”

Joshua Reynolds (CFA’11, MET’13) recalls Trotman’s “affinity for life” and his ability “to make others enjoy life.” Others remember the sound advice he would quietly offer. “He always told me to focus on people who made me feel happy and valued,” says Bashein.

Elmore, who became a close friend and mentor to Trotman, says he was “the kind of person who was present. He was responsible. He carried himself with the utmost of dignity. He would put his arm around you and try to make you think or feel better. Kyle was the kind of person everyone wanted to know.”

Trotman’s love of BU and his deep involvement as a student leader and peer advisor were why BU Today chose to profile him last year on the eve of Commencement. In the video, Trotman talked about his dreams of one day becoming a dean of students, like Elmore. And he spoke with admiration of his single parent mother, noting that she “always pushed in my head that the way to succeed was having a college degree.” His graduation, he predicted, would be “as much an accomplishment for her as for me.”

“BU was his home,” says Elmore, “and we were his people.”

Funeral services have been held. A memorial service will be held on campus in the coming weeks. BU Today will provide details when they become available.

There are 9 comments on Young Alum Remembered for Compassion, Friendship