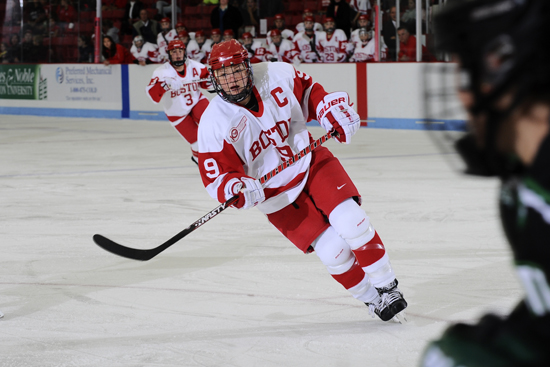 With the coveted beanpot trophy, and its attendant bragging rights, at stake, the women’s hockey Terriers square off tonight against the Harvard Crimson in the 34th annual Women’s Beanpot Tournament. The opening round for all four teams is at Walter Brown Arena, starting at 5 p.m. One of the longest running women’s tournaments in college sports, the Beanpot pits BU, Harvard, Boston College, and Northeastern against one another in a four-game battle that continues next Tuesday, with results that play a significant role in determining national rankings headed forward.

After losing to BC in the first round of the tournament and tying Northeastern in the overtime consolation game last season, the Terriers are eager for a shot at redemption.

“It’s a tournament a lot of people look back on in terms of who’s won or lost in recent years, and our four seniors haven’t won it yet, so we’re pretty excited,” says captain Jenn Wakefield (CAS’12), the team’s leading scorer and reigning Women’s Hockey East (WHEA) Player of the Week.

The BU team has yet to take a Beanpot title, in spite of making it to last year’s NCAA championship final game after only six years as a Division 1 varsity program. The Terrier women did win a Beanpot title in 1981 as a club team.

Head coach Brian Durocher (SED’78), who has shepherded the women’s team since its inception as a varsity sport in 2005, says that capturing a Beanpot title would mark a significant milestone for the program.

“The team that won as a club team back in 1981, everyone’s real proud of them,” he says. “But this would be our first one for the varsity program, and you talk about something that’s tangible—we come up with a victory here and it could be a real catalyst for us.”

Durocher emphasizes that his team prepares for Beanpot games just like any other, but acknowledges that the event is special to many of his players.

“Sometimes a Canadian kid or an international kid doesn’t really know the event, but they get sort of captivated by it once they get here and play in it,” Durocher says. “It really becomes something for bragging rights, and something they get excited about.”

It’s been an up-and-down season for a Terrier squad that entered the year with big expectations and a number-two national ranking after playing in last season’s national championship game, losing to Wisconsin 4-1. BU is 14-12-1 overall, and finds itself in third place in the WHEA heading into tonight’s Beanpot. The Terriers have won three consecutive games three times this season, but have also had two losing streaks of three or more games.

Durocher says that injuries have been a factor in the team’s performance this season.

“There were injuries to a much greater extent than people know. Caroline Campbell (SED’15) and Tara Watchorn (CAS’12) missed the first seven games, and then Marie Philip-Poulin (SED’14) and Jenelle Kohanchuk (SAR’12), probably the top forwards on our team, were gone for an extended time,” he says. “We had maybe some mental doubt creep into our heads.”

Durocher also says the team had a tendency earlier in the season to let games get away from them.

“We gave up a goal last year, and that was it. We’d shut it down, we’d come back, and eventually get the next one and close the deal,” he says. “This year we’ve let one turn into two or three too many times…and all of a sudden we’re playing catch-up. We’ve got to play for 60 minutes or we’re only an OK team. We play 60, I think we’re pretty darn good.”

Forward Kayla Tutino (CGS’13) echoes Durocher’s sentiments, but says that having to come from behind in so many games will prove an advantage for the team as the season progresses.

“I think we’ve become a mentally stronger team. We’ve had losses and we’ve had some wins, and we’ve definitely learned,” Tutino says. “Let’s say we’re down a goal—we’ve had the experience of feeling that, so we’re stronger now.”

The recent record supports the notion that the team is improving, as the Terriers are on one of their patented winning streaks going into the Beanpot. BU has won its past three games—against Vermont, BC, and Northeastern—outscoring these opponents 15 to 4.

Kerrin Sperry (CAS’14), who was named the WHEA’s Goaltending Champion last season as a freshman, says the caliber of competition her team has faced this season will benefit the squad moving forward.

“Last year we played a lot of games, but we hadn’t played the type of teams we did this year, with the likes of Wisconsin and Cornell,” she says. “Although we didn’t have the results we wanted earlier this year, I think those games have prepared us for a level at this point in the season where we know we have to be prepared for every game no matter who we’re taking on. I feel like we’re on an upswing right now.”

Wakefield also thinks the team is playing better, and says she hopes to use the recent momentum to bring home a Beanpot title.

“We’re facing a number-nine ranked team in Harvard, and then either a team ranked sixth in the nation, Northeastern, or a team ranked fourth, BC,” Wakefield says. “So either way, they’re very important games for us to win.”

The Terriers face the Harvard Crimson tonight, Tuesday, January 31, at Walter Brown Arena, at 8 p.m. Boston College and Northeastern play at Walter Brown at 5 p.m. Tickets are $5 for the general public, $3 for children 12 and under and seniors, and free for students from each of the four participating schools showing a valid student ID. Tickets may be purchased in advance or at Walter Brown Arena one hour before the game. The BU-Harvard game will be streamed live here beginning at 8 p.m.

There is 1 comment on Terriers, Crimson Face Off in Beanpot Tonight

Terriers, Crimson Face Off in Beanpot Tonight
1
share this