In the slideshow above, view images from John Silber’s tenure as president of Boston University, from 1971 to 1996. Photos by BU Photography

John R. Silber (Hon.’95), the president emeritus and former chancellor who led the transformation of Boston University from a commuter school to a renowned research institution, died early this morning, Thursday, September 27, at age 86. The cause of death was kidney failure.

Silber, who came to Boston University in 1971, was the University’s seventh president, and served for more than three decades, as president until 1996, then as University chancellor from 1996 to 2003. He also was a College of Arts & Sciences professor of philosophy and of international relations, a University Professor, and a School of Law professor of law.

Silber was strong-willed, outspoken, and often controversial, and his resolute work ethic, formidable capacity for knowledge, and dogged determination to improve both BU and the city of Boston made him well known in academic as well as political circles. During his tenure at BU—which coincided, for a time, with his unsuccessful 1990 run for governor of Massachusetts—he greatly expanded the campus, recruited top-notch faculty, including two future Nobel Prize winners, and established the University’s long-running partnership with the Chelsea Public School system, which began in 1988 and continued for 20 years. The University he served for so long awarded him an honorary degree at the 1995 Commencement.

“In the seven years I have served this wonderful institution, I have come to appreciate the magnitude of what John Silber accomplished at Boston University,” says University President Robert A. Brown. “He worked tirelessly to transform the University, introducing ever higher standards in the hiring and promotion of faculty and admission of students. There were some who found fault with his candor, and those who disagreed with him on some policy or decision, but nobody can deny John’s legacy. He was famously outspoken and unhesitant in decision-making. He left an indelible imprint on Boston University and set the foundation for the course to greatness that we are steering today. We owe John a tremendous debt of gratitude.”

While his tendency toward blunt speech earned him moments of local and national attention, most memorably during his gubernatorial campaign, his friends and supporters praised him for choosing truth over tact. “I called him the last candid man,” author Tom Wolfe (Hon.’00) said. “There aren’t many left who say what they mean, and mean what they say.” 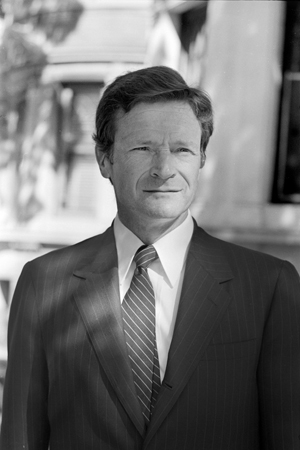 Silber was born in San Antonio, Tex., to Jewell Silber, a schoolteacher, and Paul Silber, an architect who immigrated to the United States from Berlin in 1902. He described his parents as “strict but loving” people who “gave no excuses.” In 1989, he told the Boston Globe about his realization at age four that his right arm, shortened by a congenital birth defect, would never grow. “My mother always fixed my sleeves so I would have use of my arm,” he said. “She never hid it. Neither have I. By not pampering me, they let me develop into the person that I am.”

He attended Trinity University in San Antonio, where he met his wife, Kathryn (Hon.’01), and graduated with a degree in philosophy. He earned a master’s degree in 1952 and a doctorate in 1956 from Yale, both in philosophy, then returned to his home state to teach philosophy at the University of Texas at Austin. He was named chair of the philosophy department in 1962, and the dean of UT’s College of Arts and Sciences in 1967, but a clash with the chairman of the university’s board of regents over a plan to split the college into smaller schools led to his dismissal in July 1970. His principled stand, however, won the attention of the BU presidential search committee, then entering the ninth month of looking for a new leader.

When Silber arrived the following year, the school bore little resemblance to the BU of today. The campus had only 66 education and research buildings and 42 residence halls, the library had less than a million books, and most critically, the University was operating at a budget deficit of $8.8 million.

“When I came here, we didn’t have a list of our alumni,” Silber told the University’s weekly newspaper, the BU Bridge, in 2002. “We didn’t have a balanced budget. We didn’t have a computerized payroll system. We were raising only about $2.5 million a year. Back then, running Boston University was like trying to fly a 747 without avionics, without an instrument panel.”

Silber took an ambitious tack, balancing the University’s budget in 18 months, and then launching an aggressive campaign to hire new faculty, first in the humanities and social sciences, then in the life sciences. Elie Wiesel (Hon.’74), the Andrew W. Mellon Professor in the Humanities, was recruited in 1976, and Derek Walcott (Hon.’93), a College of Arts & Sciences professor emeritus of creative writing, in 1982—both went on to win Nobel Prizes, Wiesel’s in peace, and Walcott’s in literature. At Silber’s behest, two other Nobel laureates joined the faculty, the late Saul Bellow (Hon.’04), a University Professor and a CAS professor, in 1993, and Sheldon Glashow, the Arthur G. B. Metcalf Professor of Mathematics and Science, in 2000.

Over the next 25 years, BU experienced a period of unprecedented growth and engagement with the city of Boston. New programs and institutes served a range of constituencies—with the founding of the Prison Education Program in 1972, Metropolitan College offered courses for prisoners in state correctional facilities, while the University Professors Program allowed advanced undergraduates to plan their own curricula. The physical plant improved dramatically as well, doubling in size with the addition of facilities such as the Metcalf Center for Science and Engineering, in 1983, the Rafik B. Hariri Building for the School of Management, in 1996, and the Boston University Photonics Center, which opened in 1997.

Under Silber’s leadership, BU also forged deeper ties with the community, most notably by taking the unprecedented step of managing a failing Boston-area school system. The Boston University/Chelsea Partnership, established in 1988, brought new facilities, curriculum changes, and new policies for students, teachers, and administrators into a troubled system, with the goal of making Chelsea’s school’s “a model for excellence in urban education.” The partnership, which provided the district with tutoring programs, early-childhood education, scholarships, and enrichment programs, was intended to last for a decade; it ended in 2008 after two. Silber also created the Boston Scholars Program in 1973–the largest such scholarship program in the country. In 1993, he founded the Boston University Academy, a college preparatory school for secondary school students.

Silber served on the Kissinger Commission (the President’s National Bipartisan Commission on Central America), and was chair of the Massachusetts Board of Education, which during his tenure developed the first curriculum frameworks.

Despite his success in raising the University’s profile, Silber’s direct, unguarded critiques of students and faculty made him an unpopular figure in some circles at points in his career. In 1976, unhappy with what Time magazine called his “overpowering style in office” and a proposed budget cut that could include faculty positions, 10 deans and three-quarters of the Faculty Assembly called for his resignation—a move that the Board of Trustees voted down.

His presidency was never again at stake, but Silber continued to draw public scrutiny over the years. He took a leave of absence from BU to run for governor of Massachusetts in 1990, and secured the Democratic nomination. His campaign was initially a success, but he failed to win over the old guard of the Democratic party, and ultimately lost to William Weld. After his return to the University, in 1993, the Massachusetts Attorney General investigated the finances of BU, and the University was asked to adjust its governance rules. In 1996, when he stepped down as president, he was named chancellor, maintaining an office on Bay State Road and continuing to live in BU-owned housing. In 2003, he was widely criticized for his role in selecting Daniel Goldin, a former administrator at NASA, as BU’s ninth president—and then dismissing him with a $1.3 million payout before Goldin took office.

Silber’s role at BU diminished over the next few years, as Aram Chobanian (Hon.’06), the former provost of the Medical Campus and School of Medicine dean, served as president ad interim, then president, until Robert A. Brown, the former provost of MIT, was appointed the 10th president of Boston University in 2005. Silber continued to live on the BU campus, but turned his attention to other interests, such as sculpture (he completed a bas-relief of Wiesel), and architecture. He published a well-reviewed critique of modernist architecture in 2008, taking special exception to the work of Frank Gehry, titled Architecture of the Absurd. In December 2011, he finished a critical analysis of the work of the German philosopher Immanuel Kant, a project he began in 1954 when he was a graduate student and member of the junior faculty at Yale. The book, Kant’s Ethics: The Good, Freedom, and the Will (Walter de Gruyter, 2012), was published in May. 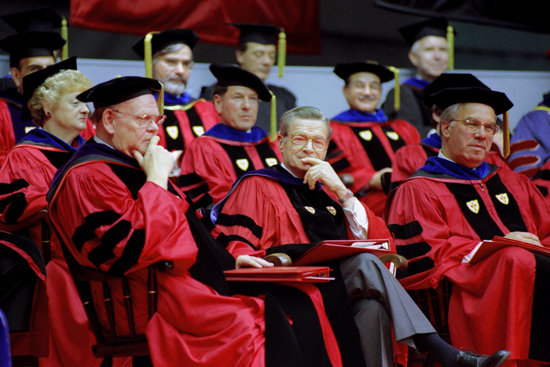 In 2007, the University honored Silber with a gala tribute, featuring letters and presentations from colleagues, dignitaries, and friends. While many friends poked fun at the former president’s notorious frankness and occasional temper, others talked of his lesser-known kindness: letters and phone calls that came at times of illness or trouble, his habit of eating breakfast and dinner with his children every day, even at the most demanding moments of his career, and his long and loving relationship with his wife, Kathryn, who died in 2005.

“What I am most grateful for was the honor and privilege of serving for more than 30 years,” Silber said at the end of the evening. “BU was one of the finest toys I was ever allowed to play with—a great toy with enormous potential, if you polished it up and gave it a few tools to make it run.”

Silber is survived by six daughters, Rachel Devlin and Martha Hathaway, of Newton, Mass., Judith Ballan, of New York City, Alexandra Silber, of Carlsbad, Calif., Ruth Belmonte, of State College, Pa., and Caroline Lavender, of Atlanta, Ga., a son, Charles Hiett, of Hot Springs, Ark., 26 grandchildren, and 3 great-grandchildren. He is also survived by his brother and sister-in-law, Paul and Phyllis Silber, of San Antonio, Tex., two nieces, and a great-niece and a great-nephew.

Funeral services will be private. A memorial service will take place in the near future. BU Today will provide details when they become available.

There are 40 comments on President Emeritus John R. Silber Dead at 86