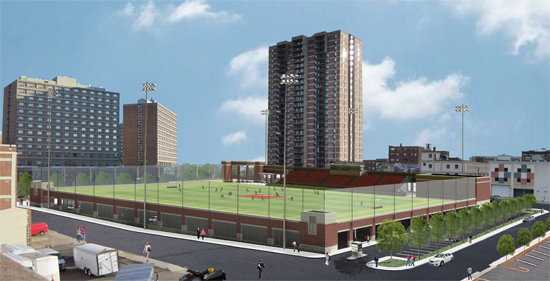 New Balance Field on West Campus, which will open in fall 2013, will make it possible for BU to add sports teams. Rendering courtesy of Clough Harbor and Associates

Athletic shoe manufacturer New Balance has pledged $3 million to Boston University for a new and much-needed sports field that will greatly improve athletic and recreational life at the school on many levels.

New Balance Field will be built on Babcock Street, near Nickerson Field, and will open in fall 2013. It will effectively double BU’s field capacity, making it possible to bring field hockey back to campus and to add varsity sports, notably a men’s varsity lacrosse team, which will play its premier season the following spring at Nickerson Field.

“New Balance Field will be a major addition to our athletic and recreational facilities,” says President Robert A. Brown. “I am very grateful to New Balance for its leadership and support and to our alumni who have given generously to make this facility a reality. The field will benefit not only our student-athletes and the greater BU community, but it will allow us to expand our very successful NCAA Division 1 athletics program.”

The University will break ground for the 110,000-square-foot field this spring, shortly after Commencement. New Balance Field will fill the BU-owned block surrounded by Babcock, Gardner, Alcorn, and Ashford Streets. Gary Nicksa, senior vice president for operations, says the open-air field will have a brick facade and stadium seating for 1,000. A 350-space parking garage will be built under the field, with an entrance on Ashford Street. The total cost of the field and the parking area is estimated at $24 million.

“The new field is a highly imaginative use of precious space in an urban environment,” says Todd Klipp, BU senior vice president, general counsel, and secretary of the Board of Trustees. “It will have an enormous impact on athletic and recreational life here, not only for our sports teams, but for the entire BU community.”

A second athletic field is a welcome solution to a space crunch on a campus where 3 varsity teams and nearly 200 intramural teams vie for space on one field. Nickerson Field has been so heavily used that the artificial turf that should have lasted 15 years had to be replaced after 8. Michael Lynch, assistant vice president and director of athletics, says that Nickerson is booked solid with games and practices from 6 a.m. to 11 p.m. every day for weeks ahead. It is often necessary to reserve the field six months in advance.

The women’s varsity field hockey team had to leave Nickerson after the 2000 season, when Field Turf, which is too spongy and slow for the sport, was installed. The nationally ranked team has not played or practiced at BU for the past 11 years, but has had to be bused to games and daily practices at MIT or Harvard. Coach Sally Starr has also had to recruit players for a team with no field.

“This new field is huge,” Starr says. “Now we’ll have one of the best fields in the conference. It will help our recruiting greatly. We already have two top players committed for 2013.”

BU is jumping into Division 1 varsity men’s lacrosse at the right time, Lynch says. Currently 61 schools compete nationally at the Division 1 level, and Harvard is the only school in the Boston area with a Division 1 lacrosse team. “It’s a sport that is really hot here in New England,” he says. “We are hoping to be a national leader here.”

With the funding in place for the field, Lynch will start raising money for the team. He plans to build the program slowly, as he did with women’s hockey. A coach and staff will be hired next year, but the program’s scholarships won’t be fully funded until the fourth year.

“From a budget perspective, it’s more prudent that way,” he says. “We can evaluate things as we go forward. We are building a team for the long haul.”

BU will also add a women’s varsity lightweight rowing team next fall. “This will put us in the class with some of the best schools,” Lynch says. The rowing program has been rebuilding over the past few seasons, he says, and the addition should help it return to the national rankings it had in the 1980s.

New Balance Field will also make it possible for BU to increase the number of intramural sports, such as ultimate Frisbee, and to bring back club sports that have had to play off campus, such as the men’s and women’s rugby.

The field will beautify a rather unsightly parcel on campus. Currently, a large surface parking lot fills most of the block. A run-down brick building housing the BU band and ROTC programs, as well as surplus office furniture, dominates the corner of Babcock and Gardner Streets. That building will be knocked down and the programs and stored furniture relocated.

A pocket park with trees will flank the field’s western side, adding a touch of green to a pavement-heavy stretch of West Campus. The brick facade around the field will have several openings, so rugby huddles and students chasing down Frisbees can be easily seen from the surrounding streets.

“For BU,” says Lynch, “New Balance Field will be transformative.”