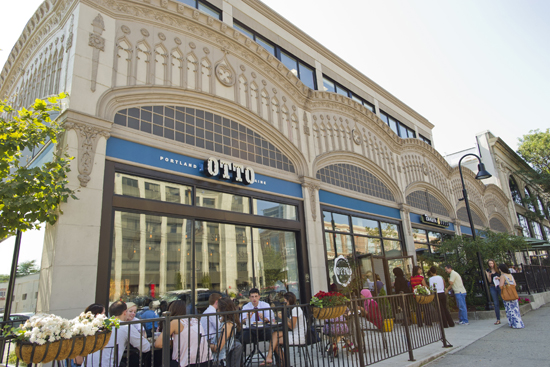 The menu at Otto is notable for pairing unique ingredients and flavors, among them butternut squash, ricotta, and cranberry; white bean, sausage, herbs, and red pepper flakes; pulled pork and mango; and zucchini, summer squash, and spinach. This is pizza for a new generation of foodies, and it’s delicious.

We stopped by for lunch on a recent Friday with six friends. The line was out the door, but moved quickly. When we got to the counter, we ordered two separate pies, each with two flavors: the first regular cheese and eggplant, ricotta, and basil, the second chicken, mushroom, and fontina and the aforementioned bacon, mashed potato, and scallion.

Despite our crowd of seven picky eaters, the consensus on the pizza was overwhelming approval. Every flavor combination was superbly planned and executed—no excess cheese here or lack of mushrooms there. And the Neapolitan-style crust was to die for—thin and crispy with an extra bounce of fresh flavor.

Otto, which first opened in Portland in 2009 (and now has two locations there), expanded to Harvard Square in 2010, and to Coolidge Corner this past May, opened in West campus late last month. The owners stress that it’s not a gourmet pizza shop, but rather a place that thinks carefully about combining fresh ingredients in an innovative way and at a price students can afford. A regular slice of cheese pizza is $3, and a flavored slice $3.50. A small (12’’) cheese pie is $9, with $1 for each topping, and a large (16’’) cheese is $15, with $2 for each topping. The menu of “house favorite” flavor combinations ranges from $10 to $12 for a small pie and $17 to $21 for a large.

The restaurant hopes to have its beer and wine license by the end of September, but until then, you can enjoy Otto’s house bottled soda ($2.50) or homemade iced tea and lemonade ($2.50) with your slice.

Two pictures of Naples native Sophia Loren hang on the walls, part of the pizzeria’s fun and appropriately themed décor. The interior is clean, simple, and spacious, and seats approximately 50 people. There is some outdoor seating as well, and on a nice day the front window-walls can be opened to connect the two spaces.

Otto Pizza offers a mix of small tables (for dining alone or with a small group) and longer tables (for larger groups or for those willing to mingle with other parties). The chairs are handmade by the owners, and the counters and tables are made from recycled wood.

With pizza this innovative, it’s easy to see why Otto was recently named one of the 10 best slice shops in New England by the Boston Globe, and why it’s expanding so quickly. The owners plan to open another location in downtown Boston in the coming months.

Otto Pizza, 888 Commonwealth Ave., Brookline, Mass., is open from 11:30 a.m. to midnight Sunday through Thursday, and 11:30 to 1 a.m. Friday and Saturday. You can call ahead at 617-232-0447 to place an order. The restaurant does not currently deliver; it accepts Visa, MasterCard, and Discover, but not American Express. To get there, walk or take the MBTA Green Line B trolley to Boston University West. Otto Pizza’s other Boston-area locations are 238 Harvard St., Coolidge Corner, Brookline, and 1432 Mass. Ave., Harvard Square, Cambridge.

Otto will host a “BU free slice day” on Monday, October 1, from 2 to 6 p.m. for students with a valid BU ID, who will also have a chance to win free Otto swag.

There are 3 comments on Lunch, Anyone? Otto Pizza