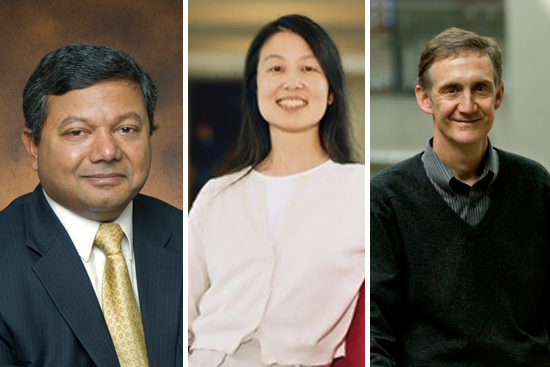 Scheduled speakers at the Hariri Institute’s first symposium are Arun Majumdar (from left), Jeannette Wing, and Ed Lazowksa; not pictured is Susan Athey.

The head of the U.S. government agency spurring innovative energy research, Microsoft’s chief economist, and academic computer scientists will headline the first symposium of the Rafik B. Hariri Institute for Computing and Computational Science & Engineering.

The symposium, being held Saturday, April 21, at the Photonics Center, will stress the importance of computational thinking and analysis in not just physical sciences, but the social sciences and even the arts, says Win Treese, the institute’s associate director. Free and open to the public, the symposium is the first in a series of still-to-be-determined events that will be held by the Hariri Institute.

“We would like the audience to get…a broad view of how computational thinking has come to be important in many different fields,” Treese says, as well as get “excitement about the potential of the Hariri Institute as a focal point and crossroads for computationally based research taking place at BU.”

BU President Robert A. Brown, whose office is cosponsoring the event, will give welcoming remarks, followed by the symposium speakers:

The Hariri Institute, begun with a $15 million pledge from BU trustee Bahaa Hariri (SMG’90), fosters the use of computation in collaborative, pioneering, interdisciplinary research and training.

“Computational thinking…helps us look at disciplines with fresh eyes” in two ways, says institute founding director Azer Bestavros, a College of Arts & Sciences professor of computer science. First, it allows researchers to better understand and control phenomena that may not at first blush seem to involve computation—for example, synthetic biology. Second, both physical and social sciences now collect and analyze data that “allow us to ask questions we could not answer,” he says, “and would not have thought to ask about before.”