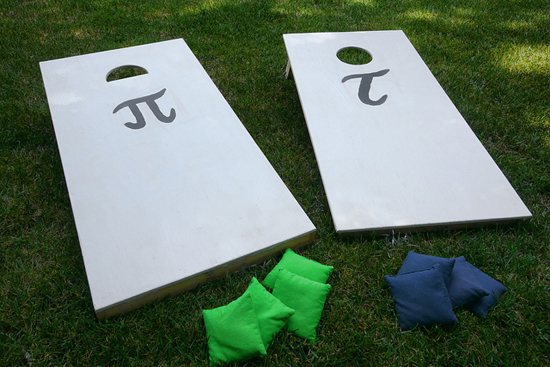 Itching to play a round of croquet but don’t have a lawn to play on? Grab some friends and head down to Dewey Square Park, on the Rose F. Kennedy Greenway where free croquet, bocce, and baggo games are offered each Wednesday from 11 a.m. to 2 p.m. Expertise is not required; there’s space for both first timers and seasoned veterans to play these popular lawn games.

Croquet was played for a short time on the Boston Common before it was outlawed in the 1890s, when, according to the United States Croquet Association, “the Boston clergy spoke out against the drinking, gambling, and licentious behavior associated with it on the Common.” In the game, players use a mallet to hit wooden balls through nine hoops, or wickets (the British game uses six wickets), which are staked into a grass playing court.

Bowling’s distant cousin bocce has been played in Italy since the time of the Roman Empire. One small ball, a pallino, is thrown first and becomes the target. Teams then throw four balls (bocci) each toward the pallino, attempting to get as close to it as possible.

Baggo, the nation’s official bean-bag game, is quite simple: two teams alternate as they try to throw bags into a hole. Because the distance to the hole can be adjusted to increase or decrease difficulty according to skill level, Baggo is perfect for players of all ages.

For those who can enjoy Dewey Square Park all day today, consider taking a free Zumba class there at 7 a.m. and relaxing after a day of exercise at a showing of Steven Spielberg’s Oscar-winning E.T. the Extra-Terrestrial that screens at 8 p.m.

Free croquet, bocce, and baggo games are held each Wednesday through August 21 from 11 a.m. to 2 p.m. at Dewey Square Park, located between Congress and Summer Streets. By public transportation, take an MBTA Green Line trolley to Park Street and switch to a Red Line inbound train to South Station.

This article was originally published on July 31, 2012. It has been updated to include current information.