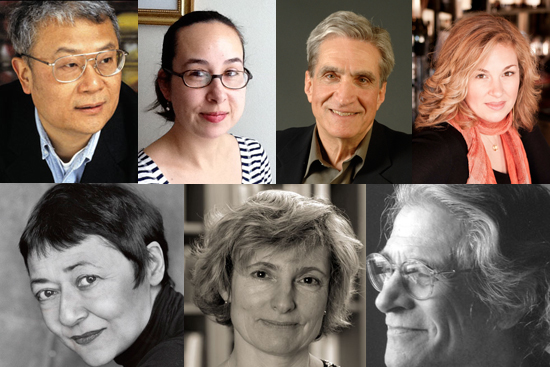 One of Boston’s premier literary events takes place tonight when BU’s Creative Writing Program hosts its annual Faculty Reading, where faculty and recent graduates of the program read from their poems, novels, and plays—some of which have never been shared publicly.

Metzler says she loves writing for the stage, primarily because it’s so hard to do. “You get nothing—you get a blank stage and a blank page,” she says. “Yet your job is to create a blueprint for something worthy of enormous collaboration, worthy of a director, and actors, and designers and an audience that is going to willingly sit in a dark room with strangers for 90 minutes. It’s a humbling and terrifying and thrilling and exceptional responsibility.”

Warren, who will read from her poem “Glaucoma,” recently published in the New Yorker, says the poem “came right out of autobiography: medical reality, a friend’s death, the impending loss of a property to which my partner and I have been very attached.” She also plans to read “a zany political poem,” she says.

Epstein will read excerpts from his just published novel Liebestod: Opera Buffa with Leib Goldkorn (W. W. Norton, 2012). “I have been reading different parts of this novel for the full five years it has taken to write this book,” Epstein notes. “At last I can stop. Farewell, Leib, you sweetheart! You darling! Farewell!”

Dan Chiasson (left) has written four books and received numerous awards, including a Guggenheim fellowship and a Pushcart Prize. He is an associate professor of English at Wellesley College as well as teaching at BU and is the New Yorker poetry critic. BU Today recently spoke with him about what inspires him to write and the new poem he’ll read tonight.

BU Today: You were in your mid 20s when you started writing poetry seriously. What drew you to poetry?

Chiasson: I was drawn to reading poetry at an early age. I never studied an instrument for very long as a kid; a few flute lessons was as far as I got. But I think I had essentially a musician’s approach to language. Language was my instrument. It’s true that I stopped thinking of myself as a “poet” after high school, but that was mainly because I was so immersed in the poetry of the past, I figured I could never match up. I mean, if you spend your days reading Milton, in one way that’s inspiring, but in lots of other ways it’s pretty humbling.

When you begin writing a poem, how do you approach it?

I write poetry so infrequently. I’m not the kind of person who has a writing desk with piles of drafts on it. I suppose I just work things over in my head until I’m ready to go. I usually write very rapidly once I’m in something. The long poem in my next book, called “Bicentennial,” I wrote in an afternoon, standing up at the counter of an apartment we were renting in Paris. Occasionally an email would come in; I’d answer it and go back to writing the poem. It was, and is, an odd, mixed state of immersion and distraction when I’m writing.

Where do you find inspiration?

I’ve found inspiration in any number of things; I never know ahead of time what will work. The main thing is to develop habits and hobbies that remove the conscious mind from the burden of “must write a poem; must be inspired.” So I write lots of essays, and correct my students’ papers, and play with my kids, or talk with my wife, or fret over money, or watch a baseball game, or look at old YouTube clips of news broadcasts from my childhood—whatever. Something ends up being “inspiring.”

Does your work as New Yorker poetry critic inform your poetry, and vice versa?

I don’t know many poets very well; my wife isn’t a poet; the vast majority of my friends are not poets or writers; my family wasn’t a highly literary family. So writing reviews and teaching (the two are a lot alike) are my way of explaining myself, explaining what matters to me on the inside, to readers whose interest in poetry I can’t take for granted. Writing poetry is very different. It feels more like secrecy than candor, more like privacy than congeniality. When I write a poem, I figure somebody somewhere might be able to explain it. When I write reviews or teach, I’m that somebody.

As a critic, what do you think makes for a good poem?

Honestly I have no idea. I like all kinds of poetry. I can only be very vague: poetry has to surprise without being gimmicky, it has to have an emotional core, and it has to have a playful, insouciant attitude towards language. Robert Frost called poetry “play for mortal stakes.” I agree.

With all your other duties, how difficult is it to find time to write?

Free time is very bad for my writing. So I try to keep as busy as possible, and figure the poems will come. I write more poetry now, with kids and jobs and writing assignments with deadlines, than I did when I had all the time in the world to waste. I am a great waster of free time; there needs to be almost none for me to be happy. Reading is another matter; I often feel I don’t have enough time or mental sharpness to read what I need to read to keep my mind fueled.

What poet influenced you when you began writing poetry?

Too many to name. But Frank Bidart made a real difference to me personally; he has taught me the most of anyone in my life about poetry. Robert Pinsky read at Amherst when I was an undergraduate; I’ve never forgotten it, and I think his “music” is probably the music I’ve learned the most from, found most useful. At Harvard, it was Jamaica Kincaid, my dear friend and our older son’s godmother, who most inspired me to be a writer: her uncompromising idea that writers tell the truth, plain and simple, along with her wild mind and sense of humor. Louise Glück has been an incredible friend and a constant source, in her work, of surprise and invention and just pure human intelligence.

What will you read tonight?

I’m going to read, very rapidly because we don’t have a lot of time, the title poem from my next book, Bicentennial. It’s about my earliest memories of the Bicentennial parade in Battery Park, Burlington, Vt. I was five. I think it’s cool that my earliest memories—there are none earlier—were of that day and celebration. There was a band concert with veterans in uniform. There were hippies. All these names for what I was seeing, of course, came later; all I have is inchoate impressions. The poem is about my childhood and the sensation of getting one little sliver of history that’s yours to glimpse, before it’s other children’s turns to glimpse their little sliver, and on and on. It has a Ferris wheel in it. I think almost constantly about Ferris wheels and other amusement rides these days.

The annual Creative Writing Program Faculty Reading is tonight, February 22, in the Photonics Center Auditorium, 8 St. Mary’s St., at 7 p.m. It is free and open to the public. More information is available at 617-353-2510, by email at crwr@bu.edu, or here.