It started with a fistfight. Morris “Moe” Ellis was a 16-year-old newsboy from the South End of Boston when he got into an altercation—with his high-school English teacher.

“He had a little fisticuffs with him,” says Moe’s son, Edward Ellis. “That ended his high school career.”

So the teenager started a new career. On his 17th birthday, Moe founded Ellis, Inc., selling automobile parts instead of newspapers. The year was 1917, “the time when automobiles were just sort of coming into their own,” says Edward Ellis, who took over the business after his father died in 1983.

From its original location on Columbus Avenue in the South End, Ellis moved his business to the new Automobile Row on Commonwealth Avenue. In 1962, he bought the three-story building at 1001 Comm Ave (near what is today BU’s West Campus). There, for four decades, the company advertised itself with a giant rooftop sign that etched itself into Bostonians’ consciousness.

Visible from the Massachusetts Turnpike, the Ellis sign could be seen in the background in the Thomas Crown Affair, the 1968 original starring Steve McQueen and Faye Dunaway (CFA’62), as well as in several episodes of TV’s Spenser: For Hire, which was based on characters created by Robert B. Parker (GRS’57,’71). It was a “navigational and emotional landmark in our city,” wrote Emily Hiestand (GRS’88) in a 2001 Bostonia article.

Until 2001, when Edward Ellis sold the building and retired, the store’s windows attracted passers-by with the latest auto accessories. “My dad was way ahead of his time,” Ellis says. “He was very good at display—I mean, most auto parts stores even today are dark and dingy.”

Today, of course, seat belts are mandated by law, and items like side-view mirrors, air conditioners, and radios come on the vehicle right out of the factory. But for much of the 20th century, such things were considered frills, to be purchased separately from Ellis the Rim Man and similar (if less eye-catching) stores.

“Radios were a big accessory,” says Ellis. “First it was just AM, then AM/FM, then somebody had a great idea: a rear-seat speaker, and that was exciting for a while.”

Ellis, Inc., was considered the largest and highest profile automobile parts and accessories distributor, wholesaler, and retailer in the area, and it was patronized by local sports celebrities, including Bill Russell (Hon.’02) and Sam Jones of the Celtics and George Scott of the Red Sox.

As car manufacturers began including AC units, mirrors, and other former accessories, Ellis adapted by catering to truck owners (who are more apt to add things like caps and custom wheels) and to those young men who relish turning their cars into rolling sound systems. The store also did a brisk business in novelty items. 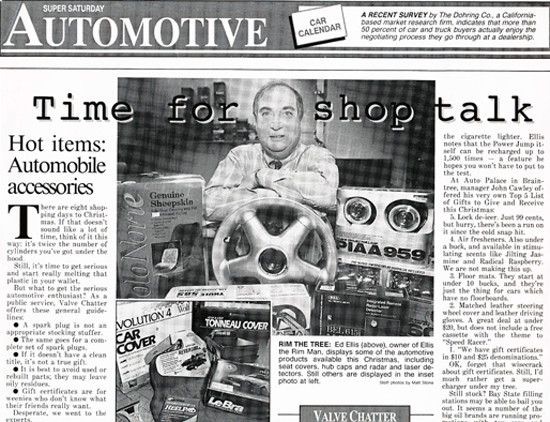 “If anybody remembers Esso, later Exxon, now ExxonMobil, they had a promotion: ‘Put a Tiger in Your Tank,’” Ellis explains. “So some of our novelty dealers came up with a simulated tiger tail with an elastic band, so you could take off your gas cap, slip this over the top of the pipe, and put the cap back on, so it would appear that you really did have a tiger in your tank, and his tail was hanging out. And later, in the ’80s and ’90s, we sold the neon that would be installed underneath your car or motorcycle to give it an eerie, outer-space type look.

“Anything people wanted, we would try to have.”

Today, when people look through the windows at 1001 Comm Ave, they see a classroom filled with teenagers. The Media and Technology Charter High (MATCH) School focuses on preparing students to not only enroll, but succeed, in college. The school requires students to take two BU courses to graduate.

And it strongly discourages fisticuffs with the faculty.

Patrick Kennedy can be reached at plk@bu.edu.

There are 9 comments on Remembering the Rim Man