Sean Mackay was itching to show off the big find from an expedition to Antarctica last fall. Dressed in T-shirt and shorts, this modern day Shackleton pulled a frosty tube from a nearby freezer, unscrewed the top, and removed a plastic bag protecting sediment-embedded ice. This was no ordinary ice, but rather a chunk from an ice core dating back millions of years that Mackay had helped extract from the depths of the South Pole during the trip.

“It’s the oldest ice in the world and inside this ice is the oldest atmosphere in the world,” Mackay (GRS’13) told his spellbound audience, a group of eighth-graders from Brookline’s William H. Lincoln School.

The demonstration was part of a daylong field trip last week for 32 Lincoln students, organized by Valerie Pasquarella (GRS’14), one of 10 BU graduate fellows in the National Science Foundation–funded GLACIER (Global Change Initiative: Education and Research) Program. During the past school year, Pasquarella and her colleagues collaborated with local public school science teachers to inject their research into lesson plans about global climate change.

Pasquarella brought her remote sensing and satellite imaging research to students in Lincoln seventh and eighth grade science teacher Sue Zobel’s classroom, where they cotaught lessons and worked on a string of science projects throughout the year. Yet some lessons didn’t easily translate without the technology available at BU.

“So I organized a day so we could try out some of the instruments,” Pasquarella said.

Zobel saw the field trip as a wonderful opportunity for her students to experience science beyond their Brookline classroom and to interact with people doing what they love. Science is alive, she said, infused with art, and “a perfectly great thing to do.”

Evan Goldman (GRS’13) and Xiaojing Tang (GRS’13) greeted the first of four groups of students on the College of Arts & Sciences roof, where they had assembled three Mark II Radiometers—scope-like instruments balanced atop a tripod and staring up into the clear blue sky. Students’ assignment: measure the amount of energy hitting the roof’s surface, or its irradiance. The exercise, Paquarella said, was taken directly from a 500-level BU course, but rewritten in language understandable to eighth graders.

A stone’s throw away, another group learned how to measure the amount of carbon dioxide in the atmosphere. Nathan Phillips, a CAS associate professor of geography and environment and director of the Center for Energy and Environmental Studies, showed them an antenna-like instrument that—among its many functions—measures this greenhouse gas. Carbon dioxide levels have increased by 40 percent since the Industrial Revolution, Phillips told the students, and that dramatic jump is alarming, like waking up to realize your blood pressure has spiked.

“You might not feel pain,” he said, “but you should be concerned.”

And that’s what Phillips advised them to be about global warming—concerned, not freaked out. “We have tremendous power and ability to make a change,” he said.

Pasquarella nodded in agreement. Talking about global climate change can be unnerving for a young audience who will inherit the environmental mess their parents and grandparents leave behind. The key, she said, “is finding that balance between scaring them and motivating them. It’s dire, but they can do something.”

In the Digital Image Analysis Laboratory (DIAL), on the first floor of CAS, students got a primer on how Mackay and his colleague Jennifer Lamp (GRS’14) use 3-D imagery to analyze glacial and rocky regions on Antarctica and Mars. They passed around million-year-old rock samples from Antarctica and donned 3-D glasses to view a picture of their class taken earlier by Mackay. 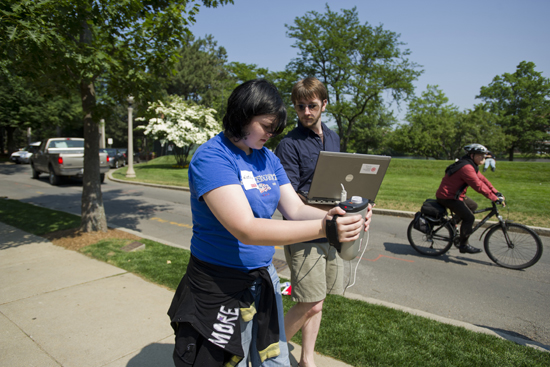 Out on the BU Beach, the last group worked with spectral signatures, a type of electromagnetic fingerprint reflected by different materials. Christopher Holden (GRS’16) and Qingsong Sun (GRS’15) taught students how to use an ASD spectrometer—a handheld device that measures reflected light—to collect signatures from grass, wood, concrete, asphalt, and brick. They later matched their readings to ones plotted out earlier on graphs.

Google Earth uses spectral signatures to plot its maps. Tropical rain forests, barren land, and tornado-ravaged towns all reflect light differently according to the natural or man-made materials found there, explained Crystal Schaaf, a CAS research professor of geography and environment, who helped with the exercise.

Lincoln student Audrey Stitt had a better understanding of the ASD spectrometer after seeing it in action. “We heard about it in class, and I didn’t know how it worked,” she said.

For Natalie Piracini, using the spectrometer was a highlight of her day: “I held a piece of equipment that was worth more than my house.”