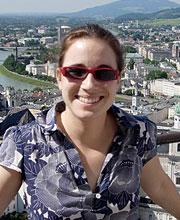 Current Research
Dr. Arkin is a cultural anthropologist whose work explores the surprising ways that a powerful and meaningful fiction of French national community—whether ethno-racial, cultural, and/or moral—has been produced, contested, and reproduced in the years following the turn of the millennium.  Her first book, Rhinestones, Religion, and the Republic: Fashioning Jewishness in France, showed how young, multiply liminal, upwardly mobile Parisian Jews of North African descent acted as a “wedge” minority in France. By tracing out young Jews’ everyday attempts to distinguish themselves from both “Arabs” and “the French,” Rhinestones explored the contingent production of normative Frenchness, on the one hand, and racial and religious “others,” on the other.  Dr. Arkin’s current book project, tentatively entitled Guardians of the Gate: Secularity and Medical Ethics on the French Mediterranean, again offers an ethnographic account of the French nation, but this time as a community of responsibility rather than belonging. Growing out of fieldwork with state-paid medical practitioners working in assisted reproduction and palliative care in three southern French hospitals, this project involves an ethnographic examination of how doctors and nurses argued for, understood, and enacted moral responsibility in relation to patients.