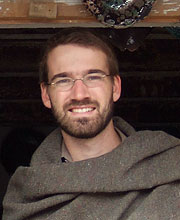 Noah Coburn’s work focuses on local power structures and political systems on the Shomali Plain. He focuses primarily on political and economic anthropology. He conducted 18 months of field research in a small town with a large, strategic bazaar north of Kabul.  His doctoral dissertation begins with a micro-level analysis of several descent groups in town, particularly several lineages of potters. The study looks at how these groups resolved disputes and how they mobilized in the larger political arena. Within the area, political power was fractured, with figures like warlords, mullahs, clan leaders, the international military, and a rising merchant class all exerting significant power. The question that his dissertation attempts to answer is why, despite this fracturing, high level of political tension, and struggle for limited resources, was this area relatively violence-free?

Noah focuses on how, faced with competition from other political groups in town, each group had significant incentive to portray itself as powerful, while simultaneously avoiding open conflicts with other groups that could reveal the limits of its power. This created a political theater where actors attempted to portray themselves as strong and well connected while rarely allowing the actual limits of their power to be tested. The result was a political system that favored stability over change, stagnation over growth, and equality over liberty. In real terms, this system de-incentivized political cooperation and rejected international-sponsored attempts at democratization through elections and other programs, while at the same time limiting the spread of violence which was so prevalent in other parts of Afghanistan and which had a long history in the area.

As an undergraduate, Noah was a religion and math double major at Williams College. He received a master’s in Russian and Central Asian regional studies from Columbia University. His master’s thesis focused on the links between economic and religious change since the collapse of the Soviet Union in Kyrgyzstan and Uzbekistan.

Noah has worked for non-governmental organizations in Romania, Honduras, Afghanistan, and the Republic of Georgia. Additionally, he has done oral history research in Kabul’s old city for the Aga Khan Trust for Culture and the Turquoise Mountain. Much of this work focused on the history of various shrines and particularly traditional forms of healing. Noah is currently in Afghanistan focusing on traditional justice and on popular perception of the August 2009 Afghan presidential election.

Noah’s lecture “Is Afghanistan a Failed State?: The Answer from One Bazaar Town” at the Institute for the Study of Muslim Societies and Civilizations in Spring 2009 highlighted his experiences of living in the city of Istalif, Afghanistan, for almost two years.