The Biology and Status of the Flores “Hobbit”: Species or Disease? 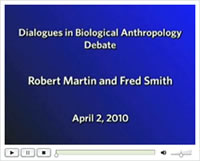 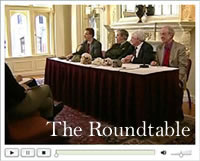 The first BU Dialogue in Biological Anthropology took place on April 2nd, 2010. The conference focused on the anatomy, context, and significance of the enigmatic remains of the little “Hobbit” female discovered in 2003 on the Indonesian island of Flores.

The conference’s initial statements and dialogue paired Dr. Robert D. Martin, Provost and Vice President for Academic Affairs and Curator of Biological Anthropology at the Field Museum of Natural History, with Dr. Fred Smith, Chair of the Department of Sociology and Anthropology at Illinois State University and Past President of the American Association of Physical Anthropologists.

The one-on-one dialogue between Martin and Smith was followed by a public panel discussion in which Boston University professors Jeremy De Silva and Matt Cartmill joined in to discuss the meaning of these controversial fossils.