The Mysterious Origins of the Genus Homo 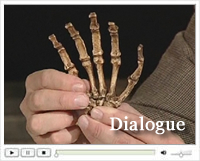 New fossils have sparked new, revolutionary ideas about the origins of the genus Homo. Did the first truly human primates evolve in East Africa, as the textbooks would have it? Or was the human homeland in Asia or South Africa? On April 7th, 2011, the third BU Dialogue in Biological Anthropology confronted these questions, along with the long-simmering debate over who owns the fossils and who gets to see them.

This Dialogue’s paired participants were Dr. Lee R. Berger (Reader in Human Evolution and the Public Understanding of Science, Institute for Human Evolution, School of GeoSciences, University of the Witwatersrand) and Dr. Adam van Arsdale (Department of Anthropology, Wellesley). Read their statements and see slides.

The one-on-one dialogue between Berger and van Arsdale was at 4:00 P.M. on Thursday, April 7 to the BU community. All BU students and faculty members were invited to read the initial statements online and submit questions for the webcast, via either e-mail or the Dialogues Facebook page.

The final public panel discussion brought participants together to answer and discuss questions from each other and from audience members live and online.